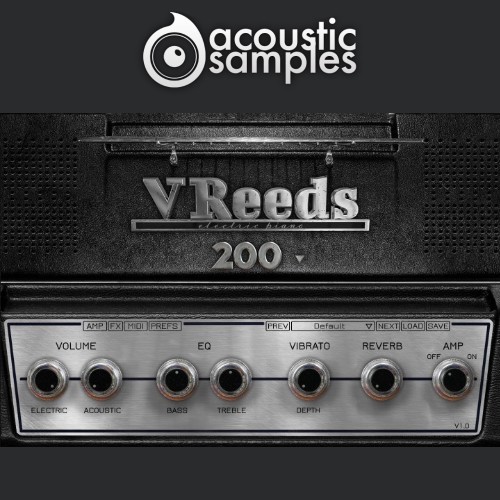 Just like for the VTines and the B-5 Organ, Acousticsamples combined synthesis techniques and sampling to achieve a high level of playability and tweaking while maintaining a realistic sound. This allows the VReeds to weight only 70Mb and to really sound like a Wurlitzer© Electric Piano with all of its imperfections while having a fully continuous response as well as a highly tweakable sound.

There are a few Wurlitzer Electric Pianos, but the most famous ones are the 200 and the 200A. There are subtle differences between the two models mainly due to the thickness of the Reeds and the amplifier circuit. Instead of choosing one, Acousticsamples decided to sample the two models and offer you the choice from the interface.

VReeds is based on real samples of two Wurlitzer models, a 200 and a 200A. They were both fully restored with original and well adjusted Reeds, and had a precise action that allowed for a perfect sampling while keeping all of the vintage Wurlitzer sound characteristics. The Acousticsamples modeling method gives you access to a 100% continuous response, a very small sized library (70Mb for both models) and a very high tweakability. It also ensures that the staccatos and releases that make up for half of the realism sound perfect, not like a fadeout, not too loud, just perfect.

The Wurlitzer sound is most of the time associated with the vibrato. Acousticsamples carefully reproduced the shape of the original vibrato circuit. On the original 200, the vibrato rate is fixed, but just like the very common mod, they decided to extend the vibrato capabilities and add a rate control which can be linked to the tempo. There is no EQ on the Wurlitzers, but it can be useful to just have one accessible quickly on the front interface.

Wurlitzers© can be recorded through the direct output, but also using its built in speakers. On the 200 and 200A models, there are two small Speakers on each side of the front plate, on the 206 and 206A (beige models), there is a bigger speaker cabinet below the keyboard. Acousticsamples captured both of these options and in both mono or stereo and we allow for a mix with the DI signal so that the VReeds fits perfectly in your mix.

Wurlitzer© pianos are often used with FX, so we created an FX panel with the most common ones, each of them is one of the very efficient and high quality FXs made by UVI. Each FX can be tweaked in real time.

Modeling also means customization, you can alter the sound of the VReeds like you would on a real electric piano and in a very easy way. A real Wurlitzer electric piano can be customized by removing the top and with a simple nut driver, you can adjust the angle and distance between the reed and the pickup bar or bend the pickup bar to change the tone. It's exactly the same on the VReeds, you just don't need the nut driver. You can adjust many different parameters for each note, for all notes or using a mapper for each parameter.

Every keyboard has its own MIDI response. The MIDI mapper allows to adjust the response of the VReeds velocity by velocity if necessary, and we created a tool that does it automatically by analysing what you play. Just repeat a few linear velocity repetitions and it will be all set and ready to play.