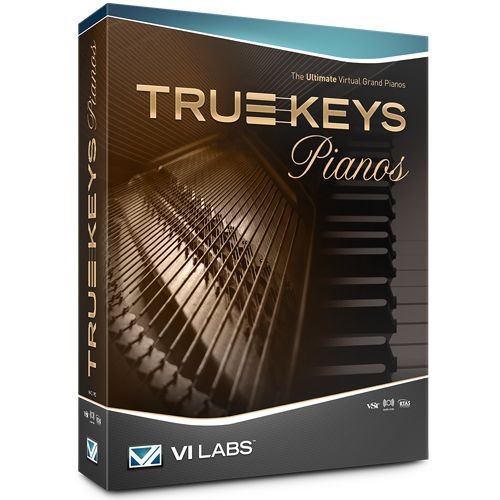 True Keys is a premium piano Virtual Instrument. It was created by recording nearly 50,000 audio files using some of the best microphones and recording equipment available today. The True Keys Piano suite gives you access to three of the greatest concert grand pianos in the world today. Choose from True Keys Italian Grand, American Grand, and German Grand.

True Keys gives you the ability to choose or mix three stereo microphone positions. You can also turn on some of the most advanced pedal functionality and resonance features in any piano virtual instrument on the market.  It's no wonder our users keep telling us time and time again that True Keys Pianos are the new standard for what a virtual piano should be.

3 of the most popular grand pianos in the world were sampled for True Keys. VILabs chose the pianos for this collection based on their craftsmanship and general tonality to ensure a wide array of tones between the library. From the pronounced low end and bombastic sound of the Italian Grand to the sweet and subtle nuances in the American Grand and everything in between we designed True Keys Pianos to be a versatile asset in your recording studio or for your live performance.

Three phase-aligned microphone setups, plus a stereo mixdown of all three offer a wide variation of tonal colors from each piano. The Side position is mono and mid-side compatible.
Grand pianos are large instruments and can be challenging to record really well. A microphone in one position of the piano may sound great for a jazz ballad but may not fit for a classical piece. In a studio recording situation, microphones can be adjusted and moved to suit the recording. Instead of limiting True Keys to one tonal option acquired during recording, multiple discreet setups were used and are selected and mixed on the interface.

The sympathetic resonances within a real piano are what bind the sound together to make the sound rich and full. Unlike other sampled and digital pianos, True Keys uses real samples for both sympathetic and sustain pedal resonance. Long sustains are rich with harmonics that naturally evolve just like real life grand pianos. True Pedal Action and Repedal add additional harmonics and enable the sound to be "repedaled" with the damper pedal. These features have been carefully developed to mimic the real pianos.