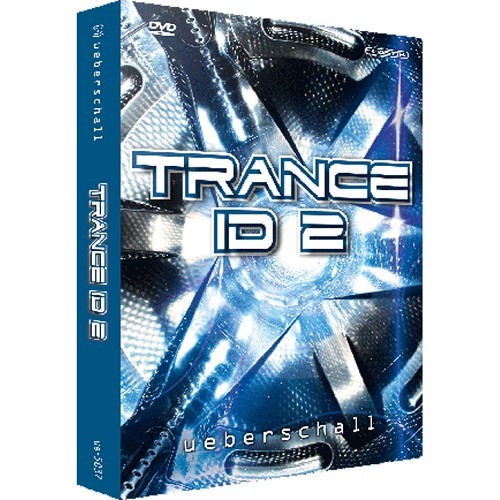 € 99,-
$ 99.00
écouter
Update Required To play the media you will need to either update your browser to a recent version or update your Flash plugin.
Produits associés
Plus d'information
Revues de presse
Specs techniques

Following the runaway success of Trance ID, Ueberschall strikes back with the second installment of the highly acclaimed sample library. Trance ID2 incorporates the latest trends in the genre such as Neo-, Electro-, and Tech-Trance, as well as elements from Progressive and Minimal.

The crush all construction kits on Trance ID 2—powered by the Elastik Loop Player—offer a huge amount of cutting-edge drum loops, synth patterns, bass lines, chord progressions, atmospheres, air and rumble, percussion and fx-sounds which can be seamlessly combined with each other, giving you thousands of possibilities and enabling you to arrange killer tracks within minutes.


Trance ID 2 kits are structured into 4 folders—one containing the main mix, a variation mix with alternative sequences and phrases, as well as a mix with separate intro and and outro’s. On top of that you get a folder containing all the individual drum sounds.
BPM information and root key (key signatures) are embedded in all loop file names, simplifying selection and direct use.

Between them, this team of renowned producers have landed dozens of club chart number 1´s, earning them huge support from the world´s top DJ´s such as Armin Van Buuren, Tiesto and Paul Van Dyk.

A real-world professional caliber workbench you can trust—this package was built for success.

Trance ID 2
The way to your own track is given within the single tracks of each Construction Kit. The samples sound fresh and can be placed in a mix without any problems.

Ueberschall provides one more time new material for producer and djs of Trance music, Trance ID 2. While the first volume already met most of the expectations of this genre the second volume covers the latest styles such as Electro-, Tech- and Neo-Trance.

The library comes with two different folders: Construction Kits and single drums.
Each one of the 30 Kits comes with main, variation, intro and outro. All in all we have 60 Kit-variations that split up to maximum 18 single tracks each. There is a lot of genre-typical soundpotential within those 2 GB library. Plus the intuitive Elastik player allows you to manipulate each loop and suit it to your needs.

The sounds leave nothing to be desired. The diversity of the delivered material covers a wide spectrum of sounds that can even be manipulated in form of pitching and tempo change. Especially because of the high quality of sounds it‘a easy to place them in every mix.

The ryhthm section includes from deep and pumping kickdrums over displosive snares to fizzing hihats. It gives you a good chance to create the drum setup of your dreams.

The way to your own track is given within the single tracks of each Construction Kit. The samples sound fresh and can be placed in a mix without any problems.

Trance ID 2
If Trance is your kind of thing, you’ll find much here in this well-produced collection to whet your whistle as you dance until the small hours in a club in Ibiza.

This 2GB sample set comprising 30 construction kits and 1,000 loops is the successor to the original Trance ID set developed by Ueberschall and is based on the slightly baffling Elastik Player for both Mac and PC (Elastik Player comes in VST, RTAS, AU and standalone formats). It incorporates, according to the cover, the latest trends in genres such as neo, electro and tech trance, as well as elements from progressive and minimal trance – lucky they told us or we may not have picked up on these subtle differences.

Each construction kit is thoughtfully divided into a main, variation and intro/outro set. For each one you can bring elements of a loop, with the loop’s tempo indicated in its file name.

The beats in this library are suitably pumped up and stylistically range from more ambient material to harder, driving near-techno. There’s also some Robert Miles- and Faithless-alike instrumentation sounds, although the beats are harder here, with a more rigid four-to-the-floor vibe. The single drums are also provided as separate elements, although it all remains within the Elastik Player interface. You can export loops with some work but it’s rather frustrating not to get the WAVs as well as standard.

This is really a sold collection of fairly predictable trance loops, but then trance is a pretty formulaic style of music. If that’s your kind of thing, you’ll find much here in this well-produced collection to whet your whistle as you dance until the small hours in a club in Ibiza.

Trance ID 2
The sounds are always good quality and the included Elastik sampler is useful. Trance, electro, progressive or minimal, Trance ID2 has something for you.

Ueberschall are reacting to the ever-changing face of electronic music by updating their successful Trance ID sample set with new cutting-edge techy sounds. Trance ID 2 is the second instalment of the sample library and now incorporates the latest trends in the genre such as neo, electro and tech-trance, as well as elements from progressive and minimal. Ueberschall’s Trance ID2 has been put together by Grammy-nominated DJ and producer Mike Koglin, along with some of Germany’s best-established music industry professionals: between them they’ve landed dozens of club chart smashes, earning them huge support from beat behemoths such as Tiesto and Paul Van Dyk.

With over two gigabytes of sounds, including 30 construction kits and 1,000 loops and single sounds, there is plenty to work with, and with the included Elastik Player you don’t even need an external sampler. Elastik is an easy-to-use loop player: time-stretching, pitch-shifting and filter with kill function are just the beginning of its functionality, and the manual for Elastik is comprehensive.
(...)
The sounds are always good quality and the included Elastik sampler is useful. Trance, electro, progressive or minimal, Trance ID2 has something for you.

IDJ rating: 80% If your taste leans towards trance then Trance ID2 will be right up your street.

Free ELASTIK 3.5 Loop-Player is included in this product.
With its intuitive Loopeye editing environment, the high-quality pitch, key, scale and tempo manipulation algorithms and the huge collection of Elastik-ready sample libraries spanning almost every conceivable musical genre, Elastik is a powerful workstation for loop-based music creation. It can be used either as a stand-alone application or as plugin within almost any DAW on both Windows and macOS platforms.