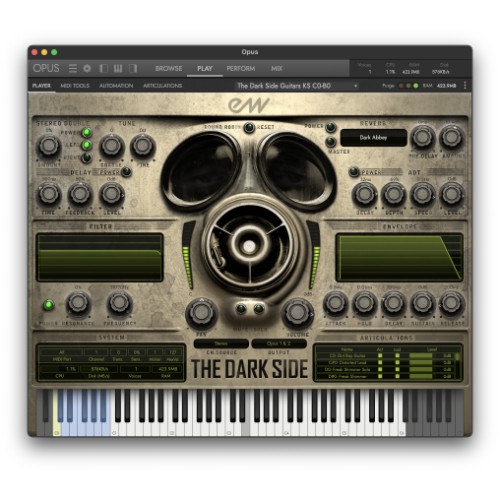 (1)
€ 199,-
$ 199.00
écouter
Update Required To play the media you will need to either update your browser to a recent version or update your Flash plugin.
Produits associés
Plus d'information
Revues de presse
Ratings
Prix
Specs techniques

Collection of dark and eerie instruments, sounds and effects

Created and produced by Doug Rogers (EastWest) and David Fridmann (MGMT, The Flaming Lips etc.), THE DARK SIDE is the first of its kind: an unconventional, hip and exciting collection of virtual instruments, some dark and eerie, and some which have been purposely—and skillfully!—mangled, distorted, or effected out of all recognition. 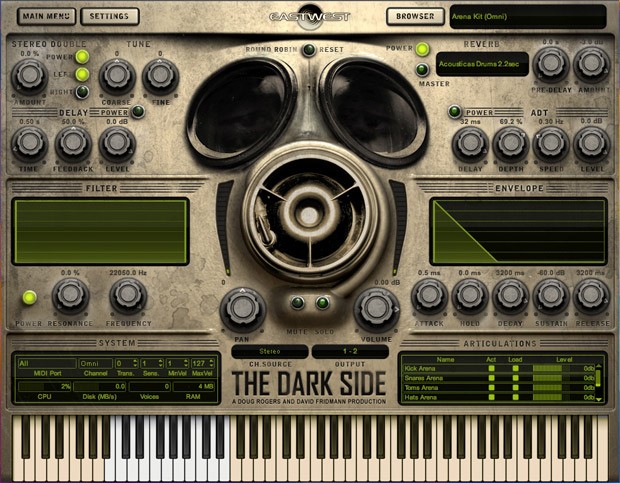 THE DARK SIDE provides inspiration for all composers and artists that are looking for unique instruments, designed to work for everything from alternative to progressive rock, and of course, film, TV, and game music production.

THE DARK SIDE includes a vast, 40 Gigabyte collection, including dark and eerie instruments, and highly processed drums and percussion, basses, guitars, ethnic, keyboard, strings, and effected instruments, all organized into instrumental groups so you can create complete tracks.

To produce THE DARK SIDE, Rogers partnered with Grammy Award-Winning record producer David Fridmann, whose unconventional (and successful) work with the likes of MGMT, The Flaming Lips, Weezer, Mercury Rev, Saxon Shore, Ammonia, Ed Harcourt, Sparklehorse, Café Tacuba, Elf Power, Mogwai, Thursday, The Delgados, Low, Phantom Planet, Gemma Hayes, Goldrush, Tapes ’n Tapes, Hopewell, Black Moth Super Rainbow, Number Girl, Zazen Boys, Sleater-Kinney, Clap Your Hands Say Yeah, OK Go, and Tame Impala etc. he had long admired.
The Concept for The Dark Side: Creativity without limits!
"THE DARK SIDE idea came to me when I was mentoring a young alternative group about some demos they sent me. To my ears, the tracks didn’t sound tough enough for their intended market, so I told them they needed to toughen up their sound,” said Doug Rogers, Award-Winning Producer at EASTWEST. “I looked around for sounds that could accomplish this and found absolutely nothing, even in our own vast collection. I saw this huge, gaping hole in the market that needed to be filled. Then and there, I decided to make it my next project after my recent pristine orchestral productions, a complete aural turn-around."

THE DARK SIDE user interface combines intuitive handling and functions as a plug-in instrument, without the need for a sampler. (Click to enlarge)

Rogers partnered with Grammy Award-Winning record producer David Fridmann. Fridmann’s “no rules” style of production was exactly what Rogers was looking for to help produce THE DARK SIDE instruments.

Once they got started, they were like bulls in a china shop: mass aural destruction was the name of the game. They turned traditional instruments into highly processed drums, percussion, basses, guitars, ethnic, keyboards, strings, and FX, all organized into instrument groups for easy audition and recall.

Rogers and Fridmann not only tapped into a wealth of recording and producing experience for THE DARK SIDE, but had the gear to match. Many individual instruments were processed through 5 or 6 effects units, some of the vintage and esoteric tube variety owned by the pair.

As the project progressed, they realized the instruments would work for almost every style from alternative to progressive rock, and THE DARK SIDE name was chosen as a play on words between both styles of music. However, most of these instruments would be equally at home in Pop, Dance, Electronica, and even Hip Hop. 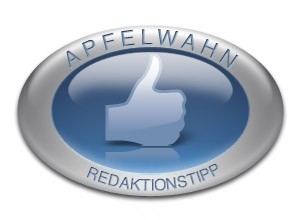