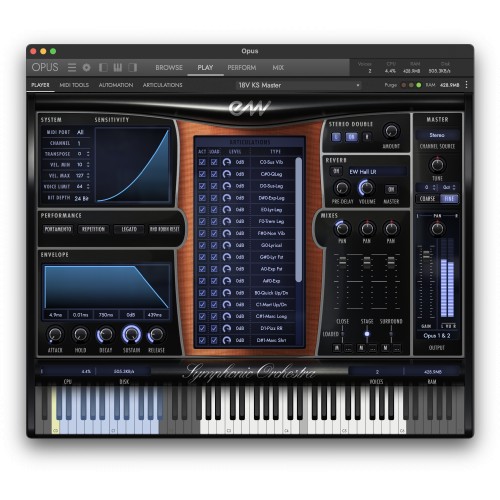 (7)
€ 399,-
$ 399.00
écouter
Update Required To play the media you will need to either update your browser to a recent version or update your Flash plugin.
Produits associés
Plus d'information
Ratings
Specs techniques

Symphonic Orchestra PLAY Edition
A lot of time and effort went into creating these 64-bit (with 32-bit compatibility) versions. There is no other orchestral product on the market that offers such upward compatibility for beginners to professional composers, and it is the most awarded orchestral collection.

The boxed/shipping version will be delivered on an external USB 3.0 hard drive for fast and easy installation!

The following versions are available:

EW-177 EWQLSO PLATINUM PLUS COMPLETE
contains 16-bit and 24-bit samples so users can compose 16-bit (for 50% more efficiency) and render 24-bit (for the best quality) with a switch on the interface, each with three mic positions and full articulations (194GB)

Also, the compatibility between Silver to Gold to Platinum to Platinum Plus has been streamlined, allowing all versions to be easily utilized on one project.

The Way an Orchestra Should SoundEASTWEST/QUANTUM LEAP Symphonic Orchestra has already come out on top in a recent roundup of orchestral collections for its level of warmth and detail. Now with the incorporation of PLAY, users of the upgraded EASTWEST/QUANTUM LEAP Symphonic Orchestra will experience the benefits of the new sample engine immediately. With the typical orchestral composition encompassing a large amount of instruments, EASTWEST‘s PLAY software will streamline the process by allowing many more instruments to be loaded at one time than with previous systems.

Beyond the orchestra´s phenomenal recording quality is its ability to breathe life into the virtual world, creating a real space and filling it with sound. In the past, this meant adding reverb and effects, further digitizing and degrading the overall quality of your music.

EASTWEST/QUANTUM LEAP accomplish this through separately recording the natural hall ambience after the instrument has stopped playing until the sound has actually ceased. The software triggers this "release trail" at the end of every note and adjusts the dynamics so that the samples blend seamlessly, truly placing the listener in the hall with the orchestra.

Each instrument and orchestral section is chromatically sampled at three different mic positions (close, stage and hall) allowing you to mix together instantly within the included PLAY sampler (PLATINUM and PLATINUM PLUS versions only) any combination for the ultimate in real-time tone and ambience control.

Multiple Mic Positions
All instruments were sampled with three different mic positions, allowing you to mix together any combination of mics using the interface for the ultimate in real-time tone and ambiance control. This feature enables users to customize the sound of the orchestra to their own requirements. Please note: while most computers suitable for running professional music software will run one of the mic positions (what you typically get with other orchestra libraries), you may need a more advanced system to have all options available.

Mic Mixer
Control all mic positions for the orchestra, choirs, pianos, and other instruments with multiple mic positions with the built-in mic mixer. Now taken a step further, do it right in the patch. Load, unload, adjust, pan, mute mic positions as you wish.

Load MORE thanks to 64-bit support
**64-bit support** allows you to load many more instruments and voices, limited only by your system RAM (32-bit support is included also).

Networking Support*
If you still need more power, our NETWORK CONTROL* allows you to load instruments on other machines controlled from your host computer. No more trips back and forth between computers, no more KVM switching when loading projects. No need to buy additional software.

The PLAY system is a professional fully integrated solution for those with the most demanding production requirements.

As Beautiful As It Sounds
Interface designed to eliminate clutter, including only the controls needed for each individual virtual instrument.

All instruments are listed in one browser
Easy to use browser displays all of your instruments. Favorites section to group the instruments you use most. Preview your instrument of choice in an easy-to-use column viewer. Load instruments into one instance to take advantage of your sequencer´s "instrument tracks", or many if you so desire. Interface automatically changes to display current instrument

Articulations
Forget browsing through complicated patch names: pick the instrument and play. Turn on/off articulations as you wish. Articulations list also serves as reference for all expressions within the instrument (no need to look up key-switches in charts). Save your favorite configuration for quick retrieval.

Effects Engine
The best sounding and most powerful effects engine out there, built from the ground up for the highest possible quality.
Reverb section includes multiple impulse responses from halls, and the famous EastWest Studios and live chambers (more RIAA certified Platinum and Gold records awarded than any other studio) The smoothest filters you´ll ever hear