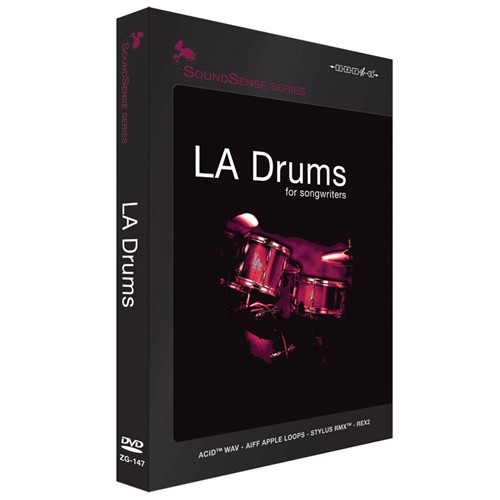 € 45,-
$ 44.04
£ 41.05
écouter
Update Required To play the media you will need to either update your browser to a recent version or update your Flash plugin.
Plus d'information
Specs techniques

Top LA session player, engineer and programmer Jeremy Janeczko who has toured with many top stars including Sheryl Crow, Cypress Hill, The Eagles, Alanis Morissette and Michael Jackson brings you this great collection of acoustic drumloops for use in all genres of music.

Working with diverse artists and jumping from Country-rock to Pop & back to Hip-Hop has allowed JJ to create loops from different genres that will also work together to create more interesting and eclectic rhythm tracks for use in today´s often demanding recording sessions.

Why spend hours trying to program your EZ Drummer or BFD when you can have a real drummer give you the groove and feel you need. LEAVE DRUMMING TO THE PROFESSIONALS!

Jeremy "J.J." Janeczko began on the LIVE circuit in the early nineties. From drum-tech to programmer to performer on multiple world tours including acts such as Sheryl Crow, Cypress Hill, The Eagles, Joe Walsh, Don Henley, Glenn Frey, Alanis Morissette, and Michael Jackson.

After joining the production staff and becoming studio manager of The Eagles´ studio "The Dog House" in Los Angeles in 1998 his engineering credits include: Stevie Knicks´ Trouble in Shangri-La, Queen´s A Night At The Opera (DVD surround), Alanis Morissette´s Under Rug Swept and So Called Chaos. The Eagles´ Selective works 1972-1999, The Eagles Box Set Limited Edition as well as their current new album Long Road Out Of Eden (He also played percussion The Eagles Millennium Box Set).

JJ writes: "I have had the opportunity to work with and learn from some of the great engineers such as: Elliot Scheiner, Steve Churchyard, Ron Nevison, Rob Jacobs and Bill Szymczyk.

I have always loved everything about the drums specifically what type they are, how they are tuned and how the sound of a room reacts to them and microphone technique.

As a collector of all types of percussion instruments and drum machines I am able to play, record and include a lot of these instruments within the library.

After becoming an avid Propellerheads´ "Reason" software user, I quickly realized that there was not a lot of "song-writer friendly" acoustic drum loop libraries out there. So I began recording one for myself and friends. It´s LIVE and natural, but can be changed to suit each user´s tastes. I hope you find it as fun to use as it was to create...

Working with diverse artists, and jumping from Country-Rock to Pop and back to Hip-Hop allows me to not only keep things interesting, but it allows me to create loops that although they may be from different genre also work together- to create a more interesting and eclectic rhythm track to be quickly created and used in today´s often demanding recording sessions...