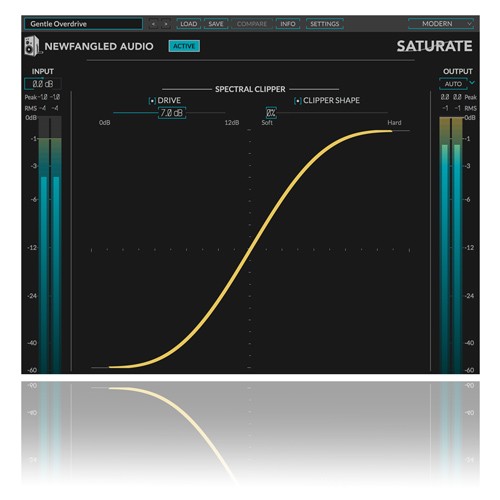 Saturate is the Spectral Clipper algorithm made popular in the Elevate Mastering Limiter. Saturate's two controls belie a sophisticated signal processing engine which allows it to overdrive a signal without effecting the tonal balance no matter how hard you push it. Add up to 24 dB of overdrive without creating a “tubby” or muffled sound.

Additionally, the SHAPE control allows you to smoothly morph between hard clipping and the mathematically smoothest curve possible. Use Saturate to overdrive individual tracks or your entire mix.

Any audio signal can be broken down into a number of sine waves at different frequencies. When you overdrive that signal the higher amplitude low frequencies can often swamp the midrange and higher frequencies that your ear is more sensitive to. Because of this, signals under heavy overdrive can lose some of their finer detail and sound “tubby” or “muddy”. This is because the lower amplitude sine waves of the midrange and high frequencies are being removed by the saturator when the low frequencies are at the top and bottom of their swing. This causes shifts in the tonal balance which are dependent on the frequency content of the signal.

Saturate uses a special Spectral Clipper technology that adds this finer detail back into the saturated signal. The signal is still saturated based on the curve, but the sine waves at different frequencies are treated independently, meaning that the large low frequencies don’t crowd out the finer detail frequencies, and that the tonal balance at the output is the same as the input - with only harmonics added.

Newfangled Audio was started by former Eventide Engineer Dan Gillespie in order to research and develop signal processing techniques that are new to the field of professional audio.

The system requirements can be found in the product description or on the manufacturer's website.