Pan Drums, or 'hand pans' are a very recent musical invention. First developed in the year 2000 by Swiss company PANart ( the Hang or Hang Drum), their melancholic sound bewitches everyone that hears it.

But, because a pan drum must be hand built and tuned by skilled artisans if it is to sound good, supply is short and they have remained relatively rare and extremely sought after by musicians ; "where can i buy a Hang drum?" is a common lament on internet forums.

Soniccouture first sampled hand pans in 2007 - releasing the best selling 'Pan Drum' sampled instrument, featuring two different models of Hang drum. Now, as the art of making hand pans progresses, new instruments are being added to the genre, so they decided it was time to update the library with new drums and a cutting edge Kontakt player interface. 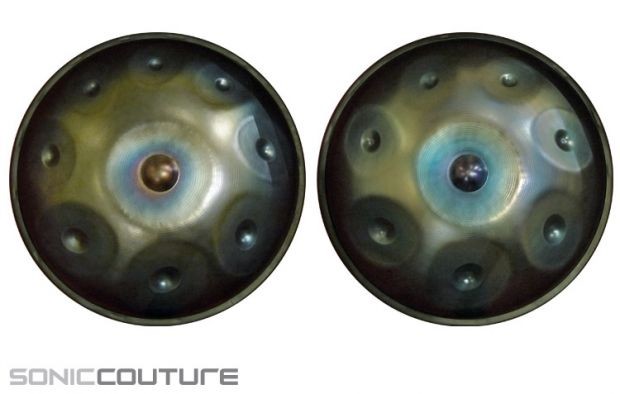 US based steel drum makers Pantheon Steel began developing Halo handpans in 2007. Soniccouture contacted Kyle and Jim regarding obtaining a Halo drum for recording. They felt very strongly that if their drums were to be sampled, then they wanted to be there to play them for us - and provide us with the the very best Halos they had available.

The Halo, now called the Halo Genesis, is larger and heavier than the Hang, giving it a lower voice, a baritone to the original's tenors and altos. We sampled two models, one tuned to C ( with 8 notes) and one in B (9 notes).

The Hang, or Hang Drum is the original and best known handpan. Soniccouture Pan Drums features the first 2 models ; the Mk1 and Mk2. The Mk 1 had 8 “tonefields” around the Ding ( central note) and was available in 45 different tunings. The Hang Mk1 we sampled is in F.

At the end of 2005 PANArt ceased production of the Mk.1 and began developing the Hang Mk 2. The Mk 2 remained basically the same shape but now had a brass coating on the top hemisphere as well as around the rim. The Mk 2 comes in only five different tunings and has only seven notes” around the Ding. It is said to be a more sturdy design, stays in tune better over time, and has a slightly longer and purer sonic ring. Rockcreek Steel Drums is one of the largest manufacturers of steel drum musical instruments in the United States. Arguably also inspired by the Hang, their steel tongue drum is a newly developed instrument that is a cross between a traditional Caribbean steel drum, a wooden tongue drum and a Kalimba.

Soniccouture Pan Drums features a pair of tongue drums tuned chromatically, played with mallets. The sound is much brighter and more delicate than the Hang or Halo, and complements those instruments very nicely.