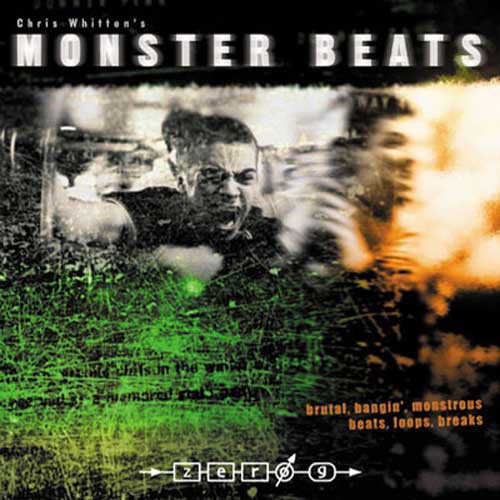 € 26,-
$ 25.82
£ 23.50
écouter
Update Required To play the media you will need to either update your browser to a recent version or update your Flash plugin.
Specs techniques

Monster Beats gives you massively chunky breaks - both clean and dirty, processed and raw. Strong and beefy, fat and solid beats to suit any music genre. Real human feel but tight and positive with mature, rich and organic sounds side by side with ground-breaking, jaw-dropping, leading edge contemporary production techniques.

Well-developed, diverse and knowledgeable patterns in usable lengths including fills and variations. From slow to fast with crescendos and drops. Includes all the separate diced rhythms plus extras and out-takes, all in perfect byte size lengths. Unique, original and ready to use.

Chris Whitten made a name for himself providing drums for the classic hits 'What I Am' by Edie Brikell and The New Bohemians and 'The Whole Of The Moon' by The Waterboys. He cemented his place as one of the Worlds top drummers with two critically acclaimed projects in the early 90's; Paul McCartney's 'Flowers In The Dirt' album and subsequent record breaking World tour, and Dire Straits 18 month 'On Every Street' tour (1991-92). Chris has also recorded with such varied artists as Tom Jones, Johnny Cash, Julian Cope, World Party, The Pretenders and The The.

Peter Henderson started his career at Air Studios where he trained exclusively with Beatles' recording engineer Geoff Emerick (Sgt. Pepper, Abbey Road etc). Peter also worked on numerous sessions as an in-house engineer with the legendary George Martin. As a freelance producer/ engineer he has worked in top studios all over the world and co-produced Supertramp´s 20 million selling 'Breakfast In America', for which he won a Grammy (Best Engineered Album). Peter has also worked with Paul McCartney, Rush, Frank Zappa, Jeff Beck, Tina Turner, Ringo Starr and The Tubes.

"Let there be no doubt that Whitten can lay it down with energy, attitude, and taste.. Monster Beats gets hearty kudos for the length of its loops as well as the variety of effects used throughout.. Well-played, well-recorded drum loops."
KEYBOARD magazine, USA