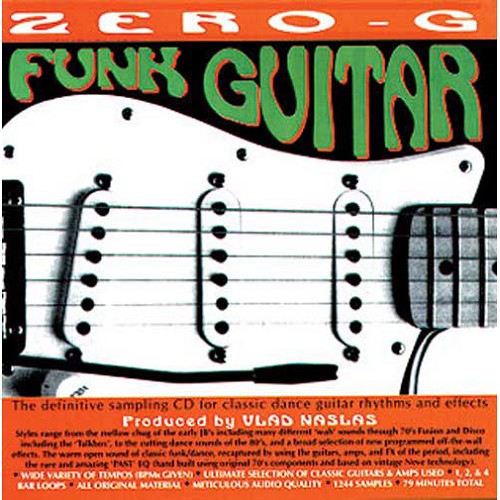 € 54,-
$ 53.70
£ 49.31
écouter
Update Required To play the media you will need to either update your browser to a recent version or update your Flash plugin.
Produits associés
Specs techniques

CLASSIC GUITAR RHYTHMS & EFFECTS, produced by VLAD NASLAS - a best-selling sample collection. This is the warm open sound of classic funk/dance, recaptured by using the guitars, amps and FX of the period. This title is an unbeatable guitar resource for discerning studio professionals (even Eric Persing of Spectrasonics described it as one of his favourite sample CDs). The sample library includes a wide variety of tempos (BPMs included), with an ultimate selection of classic guitars & amps, using 1/2/4 bar loops.

Funk Guitar is an original collection of irresistibly catchy, toe-tappin' loops, ranging from early James Brown to styles that haven't even been invented yet. It begins with a massive rare groove section, opening with some familiar "wakka-wakka" rhythms, mostly two and four bar loops at around 100 bpm to begin with. Sticking with the 60's funk style the tempos range from 81 - 128 bpm and include re-played versions of a few classics, along with heaps of original stuff. Into the Funk 'N' Fusion section, and memories of Starsky and Hutch come flooding back. This is 70s disco in a nutshell. It's hard to believe this lot hasn't come straight from the days of afros and flares - only the crackle-free recording gives it away. The car-chase music continues through the selection of Crisp and Dry riffs, which give way to some screeching, distorted heavy rock guitar loops, ranging from 91 - 128 bpm. After a bout of grungy metal noise, come the SFX, Talk Box and Vocoder sections. With the help of some meaty distortion, phase and rhythm gating effects, he's served up a double portion of pulsating riffs that are just begging to be put over a thumping dance beat. He's even got the guitar to sound like a TB303 acid bassline synth! Riffs from this CD are going to crop up on countless chart and club hits.