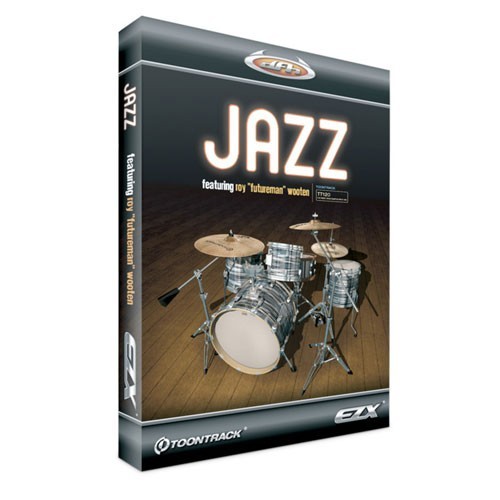 This Jazz EZX features samples performed by the legendary Drum Virtuoso Roy ”Futureman” Wooten – a multiple Grammy award winning composer, inventor, and multi-instrumentalist who has been a pioneer in using sampled drums since 1985. He has shared the stage and numerous albums with many Jazz legends. He invented and built the Drumitar to be able to voice his own revolutionary approach to Jazz with the groundbreaking group Bela Fleck and the Flecktones. As a result Futureman has performed using Toontrack Music samples to an audience of millions, live at some of the most popular and critically revered performance halls, clubs, TV shows and festivals on the planet.

About the sessions:
In the fall of 07´, Toontrack began the Jazz with Futureman at the impeccable Blackbird Studios. His passion and knowledge of Jazz history met with a relentlessly energetic and musical approach to single note striking that left the Toontrack crew in utter disbelief. Roy hears every single hit and swirl recorded as part of a larger whole, as part of a musical sequence rather than as solitary, monotonous hit. The results are samples that strike with intensity and force lending unique scope and musicality to these recordings.

A Toontrack EZ-Drummer or Superior 2.0 is required to use EZX expansions!

In the latest Computer Music (April 2009) the Jazz EZX featuring Roy "Futureman" Wooten gets rewarded the great grade of 8/10. CM:s reviewer writes that the Jazz EZX has: "a very specific tonal palette, which may not be hugely useful for anything other than jazz styles." and "So, if you´re in the market for a 100% authentic, 100% playable jazz drum kit, this is a winner. If you´re after something more versatile. though, be aware that when Toontrack say Jazz, they really mean it." Yes we mean it. Rating: 8/10