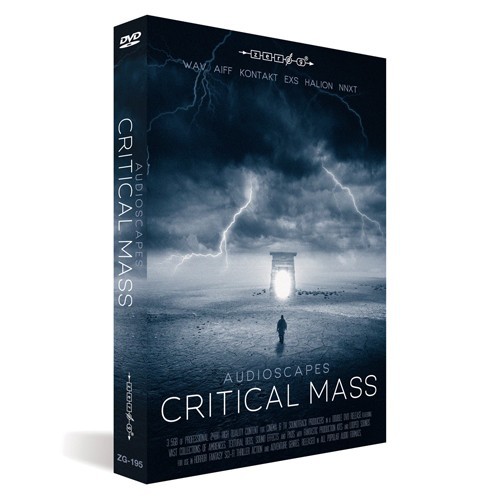 CRITICAL MASS is the latest in a long line of award winning cinematic sample libraries from Zero-G. Influenced by the latest in cutting-edge Hollywood sound design and film scoring, this library contains a wealth of sonic material ideally suited to cinematic and video game projects.

Critical Mass provides you with a vast expanse of new and experimental sound materials generated using the most bleeding-edge digital signal processing techniques. This colossal collection of sounds has themes ranging from chilling deep space horror all the way through to sumptuous heavenly atmospheres. It has been designed to suit all the needs of professional audio-video producers such as TV, cinema & game score composers and also EDM music producers who want to add something unique to their tracks.

This incredible library contains over 750 instruments in EXS24, Kontakt, HALion and NN-XT formats as well as over 700 Acidized Wav Files and Apple Loops all recorded in dazzling 24bit by the same producer who created the critically acclaimed Dark Skies Cinematic Ambiences library. You are guaranteed quality from the outset.

In addition to hundreds of atmospheres, soundscapes, textures, hits, stingers, pads and FX there are 30 production kits which present the sounds within short, musical/sound design ‘cues’ to inspire the user’s imagination and aid them in quickly and effectively achieving their creative goals.

So, reach for Critical Mass and make a quantum leap with your sound creation