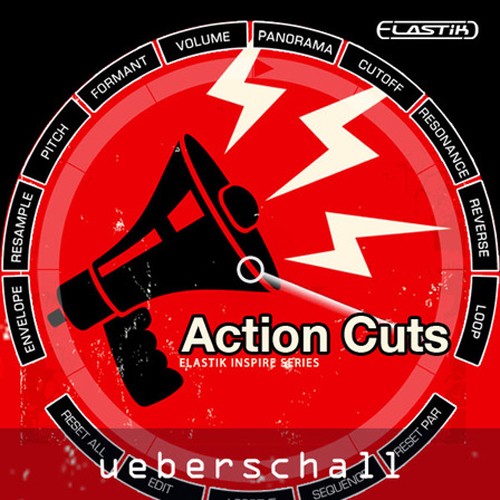 € 99,-
$ 98.06
£ 90.69
écouter
Update Required To play the media you will need to either update your browser to a recent version or update your Flash plugin.
Prix
Specs techniques

Action Cuts has been specially designed to create music for action-heavy scenes. Experience impulsive Soul- and Funk-beats resembling the popular sound of seventies‘ crime series and action movies and brought back to new life in modern big beat style. Combined with rocking guitar riffs, rolling basslines and funky talkbox-licks, these loops will speed up every dynamic scene dramatically. This makes Action Cuts the ideally solution for movies, TV-series, advertisements and games.

Of course, Action Cuts is also suited for song productions that rely on the power and dynamic of these cinematic tracks. Producers of Big Beat, Breakbeat, Crossover and Dance will find as much inspiration in this library as scoring musicians.

This 1.2 GB-Library does not contain conventional construction kits. Rather, Action Cuts is a pool of ideas consisting of no less than 820 loops to be freely combined. So to speak, this library is a single huge construction kit. And there is no danger that two musicians will produce almost the same track.

The drum loops of this library contain complete beats, breaks, drum-SFX-loops as well as single loops of kicks, hi-hats, snares and cymbals to be freely combined and exchanged. Instrumental phrases include electric- and synthesized basses, electric guitars, synthesizers, effect sounds, vocals and talkbox licks. All loops are sorted in categories while tempo and pitch can be freely adapted using our Elastik player. Track creation is fully in your hands with guaranteed individuality that is even promoted by our Inspire-concept.

How does the „Elastik Inspire Series“ work?

Ueberschall‘s „Elastik Inspire Series“ redefines the workflow with loop libraries. With its clearly laid out user-interface and its elaborated tagging-system, Elastik player enables you to create new tracks almost on the fly. All movements are fast and easy. All Inspire-loops and instrumental phrases will match perfectly to each other, even across different genres. In addition, you may instantly exchange loops of the same instrument group using the intelligent random-replacement-function. The results are always perfectly matched as all samples of the „Elastik Inspire Series“ are carefully adjusted and designed for this purpose. This leads to endless new ideas that can be used as song starters for a million of new tracks.

For creative musicians being active in the field of production, movie- and television scoring, multimedia and web, the „Elastik Inspire Series“ is a cornucopia of inspiration. Due to Ueberschall‘s high production standards, the resulting tracks can easily be integrated into your production directly, without any need of additional processing and edits.

Ueberschall‘s Elastik player is the perfect tool for fast and efficient work, no matter if you work under time pressure or simply aim for creative workflow improvements. Using its high-quality and fast zplane-algorithms, the loops of Action Cuts can be easily adapted to each project in tempo and pitch. Moreover, search through all loops of all installed libraries using Elastik‘s attribute based browser and combine your results with the samples of Action Cuts. In addition, all samples and loops can be manipulated in sound using functions such as resample, formant, reverse and an effective multi mode filter - from slight variations to extreme alterations. Let Ueberschall‘s Elastik player boost your workflow and creativity.

Action Cuts has been produced by Marc Steinmeier who has already been responsible for various successful Ueberschall libraries. Participating musicians were Peter Jordan (Guitar) and Christian Flohr (Bass).

Free ELASTIK 3.5 Player is included in this product.