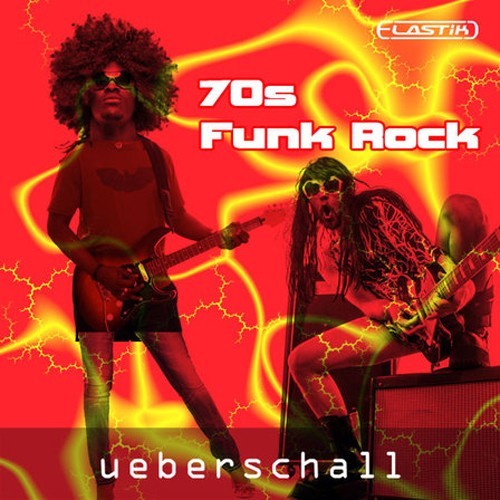 Back in the 70s, Funk doubtlessly offered the best groove while Rock featured the best sound. It is not for nothing a lot of this period‘s productions are still counted among the unrivaled milestones of music. We need to thank the masters and heroes of this era for not just mixing elements of Funk and Rock but for creating a dense fusion of both genres. Guitarists spiced up their funky licks using overdrive and octave pedals, adding furious lines and backings, including virtuosic Jazz-solos and extraordinary key changes. Drummers added syncopations to their grooves while a heavy dotted bass kept the foundation. Keyboarders were finally able to prove their abilities outside the typical jazz combo, changing their play during the song using Hammonds, Clavinets and Minimoogs. Ueberschall‘s 70s Funk Rock combines the energy-filled mixture of this creative era with the endless possibilities of modern music production.

This 3.3GB Library contains 20 construction kits with 1.965 loops. Each kit consists of up to six parts. Easily create conclusive arrangements using A-, B- and C-parts, breaks, intros and outros. The tempo ranges between 100 and 120 BPM and can freely be changed using Elastik-Player.
All kits have been performed in the classic Funk-Rock lineup: Rhythm-guitar, lead -guitar, electric bass, B3 organ, moog synthesizer, Hohner Clavinet D6 and a drumkit that is available as ready-to-use submix on the one hand, as well as elaborated mic‘ed version with single tracks for all drums on the other. Find separate tracks for inner and outer miking of the bass drum, snare top and bottom tracks as well as overheads.

All instruments have been captured dry using highest quality converters at 24 bit and 44.1 kHz sample rate. No additional effects or dynamic processing has been applied, apart for the mixed loops. This way, all options to shape the sound lie at the users‘ hands. Use your personal tools to get your individual Funk-Rock-sound out of these timeless and iconic sound sources. Since this style is rarely produced these days, 70s Funk Rock is also the ideal source for authentic grooves. Almost like taking samples from your record collection. This makes the library not only suited for music production and composition of the Funk-Rock-genre but also for recent crossover styles, sample based tracks. Plus, it is equally suited for advertisement production, game-, film and TV-scores where 70‘s context is required.

Elastik-Features
Ueberschall‘s Elastik-Player allows superior and fast adaption of the library‘s loops in time and pitch to match any song layout. It is also easily possible to combine single parts of a construction kit with other kits and even other libraries. All installed Elastik-libraries are immediately accessible from the plug-in‘s browser - ready to use at any time. On top of this, Elastik-Player offers various options to modify and transform your loops to be used in different situations. Elastik-Player boosts your workflow as well as your creativity.

Free ELASTIK 3.5 Loop-Player is included in this product.
With its intuitive Loopeye editing environment, the high-quality pitch, key, scale and tempo manipulation algorithms and the huge collection of Elastik-ready sample libraries, spanning almost every conceivable musical genre, Elastik is a powerful workstation for loop-based musicproduction. It can be used either as a standalone application or as plugin within almost any DAW on both Windows and macOS platforms.